An exciting new season of squash has been boosted by the news that Squash Wales will be one of the new teams added to the Premier Squash League (PSL) for 2018/19 in an updated format.

Split into north and south divisions, the 12-team competition will see teams from across the UK complete 10 league rounds consisting of home and away fixtures; before the top two teams from each division progress to end-of-season play-offs.

Kicking off on September 25, Squash Wales will make their PSL debut against Coolhurst, before taking on the likes of Bexley, Chichester, St George’s Hill and Tradition @ RAC. 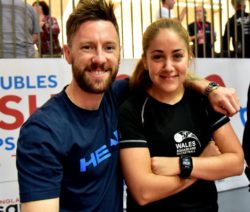 League matches will comprise five-player teams (four men, one woman). A provisional squad of 10 male and female players has been announced by Squash Wales – including Wales number ones Tesni Evans and Peter Creed – with the competition also planned as a development platform to introduce Welsh transition and youth players into the arena of competitive, international-standard squash across the season.

Squash Wales High Performance Coach David Evans said  “It’s superb to have top level squash back in Wales after so long being out of the league. It will be superb for our players to compete against other World ranked opponents in front of a vocal home crowd.”

Squash Wales Director of Coaching, Mike Workman, said: “After the recent success of our senior players at a series of prestigious international events, the time is right to expose a greater number of Welsh players to this higher playing standard. With the current resurgence in both playing and spectator participation, it is our job to generate increased publicity and coverage for Welsh squash – at home and further afield.”

Home fixtures for Squash Wales in the PSL will be played at the Sport Wales National Centre in Cardiff.

“We are aiming to be competitive, but we also have an eye on the future. Our up-and-coming juniors and transition players will take an active part in watching and competing in this world-class environment – which we hope will reap benefits for Welsh squash in the future,” Workman added.

The Team name and players will be released very soon ….

If you are interested in supporting the welsh PSL venture as a volunteer or sponsor, please contact  mike.workman@squash.wales