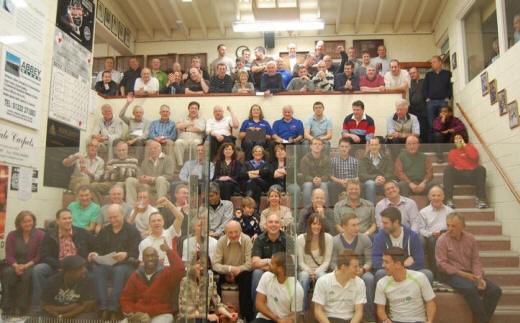 Defending champions Surrey Health & Racquets and TWP St George’s Hill will meet in an all-Surrey Premier Squash League (PSL) final after both teams survived nail-biting semi-finals of the world’s most prestigious squash league which went to the wire.

Firm favourites St George’s, playing on their home courts in Weybridge, twice led in the tie – but on both occasions the Leeds visitors rallied back to draw level. Guildford-based Dominique Lloyd-Walter put the hosts ahead with an 11-5, 11-7, 11-2 win over Yorkshire’s Carrie Ramsey – but Chapel Allerton bounded back when 21-year-old Adam Murrills, making only his third appearance this season for the visitors, despatched experienced veteran Stephen Meads, a 40-year-old former world No11, in straight games.

In one of the standout matches of the night, the home side’s Hungarian number one Mark Krajcsak battled for 60 minutes to overcome Yorkshireman Laurence Delasaux 10-12, 11-3, 5-11, 11-8, 11-4 to claim his 16th successive PSL win for St George’s Hill!

But Channel Islander Chris Simpson patiently fought for six minutes longer to see off the hosts’ higher-ranked Swiss number one Nicolas Mueller in five games to set up the top string decider.

And whilst Selby had the advantage of 29 world ranking places above Frankcomb, the world No12 from Essex has struggled to live up to his national and international reputation in his PSL performances this season.

But the 28-year-old England international was determined not to let his team-mates, and the packed St George’s crowd, down – and crafted out an 11-8, 11-7, 11-9 victory to take his club into their maiden final.

“That was fantastic – I haven’t won many for St George’s this season and a few of my mates have been giving me a bit of stick over it,” said a jubilant Selby afterwards. “But I said I’d try and pull it off when it really matters, and tonight was the night!

“Unbelievably, it’s 11 years since I was last in the PSL final – for Connaught at Lambs, and we lost. So I’m looking forward to my first win. In fact it’s one title I’ve never won – and my sister (Lauren) was in a winning team last year and keeps ribbing me about it, so hopefully I’ll be able put that right.”

Selby is likely to find himself facing close friend and England team-mate Peter Barker in the top string clash. “We haven’t played for a while actually, so it will be good. But tonight’s match was tough – Aaron is getting better all the time and never gave up. I was lucky to get through,” added the St George’s star.

St George’s Hill team manager Danny Lee was delighted with his team’s success: “It was a fantastic night. We’ve got a really good squad – and having the depth means a lot. Everyone really works well as a team – they all put in so much effort.

“It’s difficult to highlight a ‘man-of-the-match’: it was Daryl that finally delivered the goods, but Mark Krajcsak made a vital contribution and played really well to win his match,” concluded Lee.

Title-holders Surrey Health & Racquets, who finished as runners-up to St George’s Hill in Group B, had the disadvantage of an away tie – at three-time champions Benz-Bavarian Duffield. Buoyed by a packed partisan crowd at their Derbyshire club, Duffield took a 2/1 lead after a dramatic five-game win by local heroine Laura Hill over higher-ranked Victoria Lust, and a straight games victory by world number one Nick Matthew over England team-mate Peter Barker.

But a courageous performance from the visitors’ Adrian Waller saw the former British junior champion beat Duffield’s Australian Matthew Karwalski 3/0 to leave the tie in the hands of the teams’ second strings Adrian Grant and Joel Hinds.

World No18 Grant, winner of a Commonwealth Games Doubles gold medal with the opposing team’s Nick Matthew, took the opening game against the lower-ranked Hinds – but the Duffield hero defied the rankings by fighting back to level the match.

Grant’s greater experience shone through, however, and the London-born left-hander took control of the match to win 11-7, 6-11, 11-1, 11-7 to take Surrey Health into their third final in four years.

“I’m very proud of the team – it was a brilliant effort,” said Surrey Health’s team manager Pete Smith. “Adrian was brilliant – and brought us through despite a very hostile (in the nicest sense of the word) crowd.

“But Adrian Waller was perhaps our star of the night – when he went on we were 2/1 down and things were looking bleak. It’s excellent that it’s an all-Surrey final – and we look forward to meeting our local rivals for the third time this season,” concluded Smith.