First on were the fifth strings, Deon Saffrey and Millie Tomlinson. Tomlinson started fast and snapped up the first 11-6. Both players produced some fantastic front court winners, but Tomlinson won the key exchanges in taking both the second and third 11-9.

Meanwhile, Kyle Finch and Richie Fallows put on a showstopper of a fourth string match. The first game was high-paced and exciting, and was edged 16-14 by Fallows after countless monster rallies. The game seemed over when Fallows took the second 11-6, but Kyle picked up once again to take the third 11-8 and push the match to a fourth game. Ultimately, Fallows appeared to cope better with the high intensity, and coolly won the fourth 11-4.

Next on were the third strings; Jan van den Herrewegen for Birmingham, and Declan James for Nottingham. Declan played with an air of confidence after his success at the National Championships, and comfortably found himself up 2-0, winning games one and two 11-8 and 12-10. Jan, however, took inspiration from the home crowd and stormed the third game 11-4. Declan responded perfectly, winning the fourth 11-2; hitting some outrageous winners in the process. 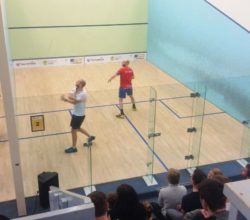 The second string match was more exciting still. Lions’ Jaymie Haycocks also enjoyed the National Championships in Manchester, and looked to continue his good form as he took a 1-0 lead over Nicholas Mueller (11-5).

The next two games were a spectacle of high paced squash, shared by the tow players; Mueller taking the second 12-10 and Haycocks the third, 13-11. Haycocks appeared less comfortable in the fourth. Mueller took advantage, and impressively claimed the game 11-8. The fifth was intriguing and exciting, though surely mentally draining for the players. Finally, Haycocks sealed a fantastic win, taking the fifth 11-8. 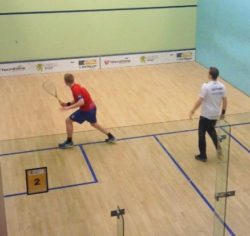 Last on court were the first strings, Joel Makin and former world #1 Nick Matthew. After one spectator won a signed Matthew shirt, through a charity raffle, it was time for the National Championships winner to show why he is still one of the world’s best. His opponent Makin would be no pushover, and pressured Matthew every point of the first game, though he ultimately lost 11-5.

The second saw an even better, faster Makin challenge the daunting presence of Matthew. Once again, however, Matthew dominated the majority of the big rallies and won 11-7. Despite an anomalous 11-2 third game hiccup, Matthew controlled the rest of the proceedings – winning the fourth comfortably 11-3.

Previous R7: Chichester win top of table clash with Bexley
Next Playoffs approach with all to play for 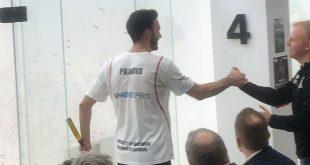 Round SEVEN : Home wins all round as WarKens hold on to beat RAC

With the playoffs approaching there were some crucial matches tonight in the Karakal Premier Squash League, with all three home teams taking two-nil leads after the women's matches ...