The fifth round and final match of the first half of the season of the PSL  2015/16 season took place on Tuesday December 8 at Chichester Racquets & Fitness Club.

Team Chichester, currently joint third in the League, played its third home fixture against top of the League St. George’s Hill. Team Chichester’s number one string, Adrian Waller, was not in the line-up [due to injury] and a tough encounter was in prospect.

Chichester’s Lauren Briggs was in good form as she dominated the match. She used a good variety of drives and boasts and deceptive holds in the front of the court to defeat former Team Chichester player Dominique Lloyd-Walter 11/8, 11/8, 11/5.

Meanwhile Nathan Lake got off to a great start against St George’s WR51 player Joe Lee, by controlling the game with a good variation of shots to win the first 11/4. Lee then started to make strides into his game and began hitting a better length as well as controlling the front of the court. Lake was unable to keep his opponent behind him and Lee eased through to win the next three games 11/8, 11/4, 11/4.

Next on court Kyle Finch, British U17 Junior Champion for the second year [won last month], played Charlie Lee, who won the English U17 championship in March. The first two games were extremely tight with both players taking turns to dominate the game with good deep hitting and extremely fast pace to the front. Finch had the edge in the first two games and in the third he forged a good lead and despite a slight lapse in concentration towards the end he managed to close out a good 3-0 win for Chichester.

Next on the glass-back court Robbie Temple followed on with a tough encounter against WR23 Tom Richards. Temple started well and took control in the first game to win it 11/8. A lapse in concentration in the second gave Richards the chance to take control and dominate the game which he won 3/11. In the third both players rallied well, with excellent all court squash, but Richards played the big points well and won through 4/11. In the fourth Temple established a good which he held to 10/7. Richards, however, fought back with conviction to force a tie-break. Richards finally pulled through to edge a win 15/13.

The crystal ball predicted a 4-1 win for St. George’s but Team Chichester had other ideas and once again forced the tie to a decider and this time they triumphed in spectacular style.

The final match on the championship court was between the number one strings. Team Chichester’s Paul Coll  [NZ WR39 and current Australian Open Champion] played WR17 Borja Golan. Golan started well and masterfully controlled the middle of the court. Golan took full advantage when Coll made a few mistakes and won it 11/5. In the second it was Coll who started well, although it was still close. Coll’s continual retrieving and explosive speed served him well and he won the next two games 11/8, 11/7. In the fourth it was nip and tuck all the way and again it was Coll’s retrieving which proved decisive. He won a magnificent and thoroughly entertaining match, which lasted 68 minutes, 15/13 to give Team Chichester a well deserved victory.

St George’s Hill remain top and Chichester fourth, but with just five points between the top four teams it’s all to play for in the second half

Previous R4: Surrey pushes past Winchester to get back on the trail
Next 08-Dec : Round FIVE 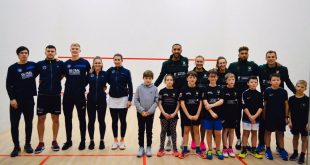 Round Five : Home teams dominant as first half concludes

It was a good night for the home teams as the first half of the 2019/20 Karakal Premier Squash League concluded with all four matches ending in emphatic defeats for the visitors ...